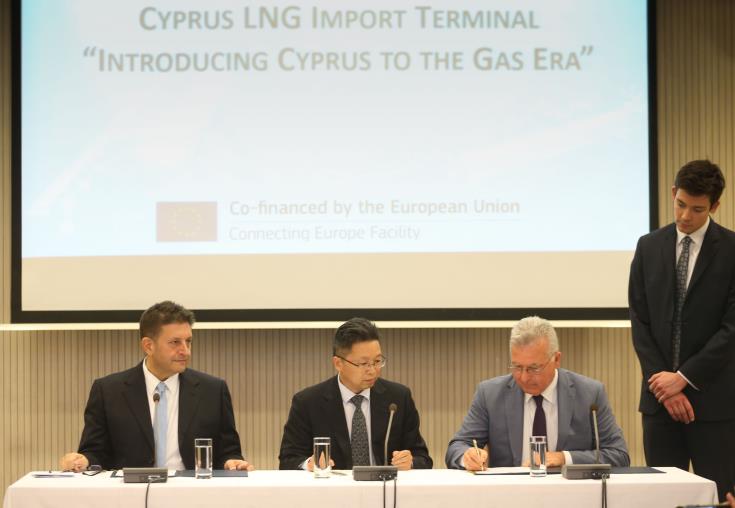 According to ETYFA’s statement, by accepting the notice, “the parties of the Consortium declare their commitment and their ability to deliver the natural gas infrastructure for electricity purposes within the specified schedule”.

The total project budget is €290 mln. Part of this capital expenditure will be covered by the European Union, in the form of a €101 mln grant through the “Connecting Europe Facility”.

Another €43 mln was provided as equity capital by the Cyprus Electricity Authority, while the remaining amount will be financed by borrowing on favourable terms.

“Co-financing the construction of the project, and creating government-owned facilities, is the optimal choice for the Republic of Cyprus,” said ETYFA.

“It creates fundamental conditions for reducing the price of electricity offering increased benefits to the Cypriot economy and the consumer,” it added.

In December, Cyprus signed a landmark deal with a Chinese-led consortium to build a terminal for the import of LNG for electricity generation.

ETYFA signed a contract to build its first LNG terminal with the multinational consortium led by China Petroleum Pipeline Engineering.

Cyprus intends to import approximately 0.5 bcm of LNG through Gas Sale Purchase Agreements (GSPAs) with a duration of three to four years, maintaining the option to purchase LNG also from SPOT markets.

Turning to natural gas will help Cyprus safeguard energy supply, diversify the energy mix, and promote competition in the electricity market through the involvement of independent producers.

Cyprus had three unsuccessful attempts to import natural gas in the past due to its small size and energy needs.

The use of natural gas will reduce Cyprus’ carbon footprint by 25% to 30% in replacing oil-burning for electricity generation.

Based on conservative estimates, electricity generation cost savings will range between 15% to 25% from 2022-2025.

Greek oil and gas producer Energean has made a pitch to sell its Israeli natural gas to Cyprus via pipeline at a “competitive price” while Nicosia is opting for LNG.

It has offered to build a $350 mln pipeline to Cyprus — using its own money — to supply gas from its Karish North field to the island.

So far, Cyprus has said it does not need the pipeline as it plans to install a floating LNG import terminal.

It is also set to award a long-term supply contract for LNG — in effect creating a single-supply market.

Hoegh LNG said it was offering Cyprus the stop-gap installation, within the first quarter of 2021, of an FSRU at Vasiliko and a pipeline to transport the gas to the EAC’s power plant and potentially other users.

“This solution can serve as interim until the state-owned LNG infrastructure is in place at Vasiliko.”

The company said its proposal “does not in any way interfere with the government’s plans”.

It said Cyprus, “will be able to save in excess of €100 mln per year from 2021 onwards, by switching power generation to burning natural gas from heavy fuel oil”.

It clarified that the proposal “requires no state aid or investment” and Hoegh LNG is “open to working closely with DEFA, for delivering this important infrastructure project for Cyprus”.

Cyprus is pushing forward to diversify its energy mix to reach new emission targets for the country’s power production.

The country plans to replace the consumption of refined oil products with cleaner solutions such as LNG.

Hoegh says the plan for LNG imports into Cyprus consists of using one of its floating storage and regasification units as a fast track solution for the required fuel switching.

The FSRU can stay on location as a bridging solution or for an extended period serving different customers on Cyprus as well as bulk breaking and delivering LNG to other customers in the Mediterranean.