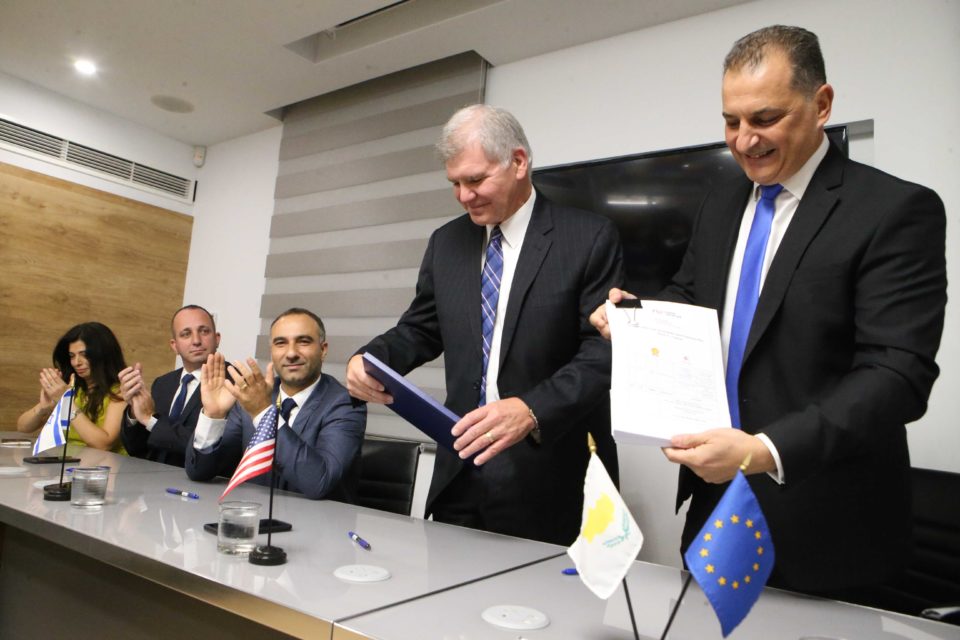 Cyprus on Thursday granted the first hydrocarbon exploitation licence to the consortium that owns the Aphrodite concession, with a view to pipe gas to Egypt and export it in the form of LNG.

The licence, granted to Noble Energy, Shell, and Delek, is for 25 years.

It is based on a production and development program agreed between the government and the companies.

The plan provides for the gas to be piped to a liquefaction facility in Idku, Egypt and later exported to Europe and elsewhere in the form of LNG.

Shell, operators of the Idku facility, in which they also have a 35 per cent stake, will be the buyer of the gas.

“I believe that today’s development is yet another milestone in Cyprus’ energy program, demonstrating that, despite all the difficulties, our program is proceeding as planned,” said energy minister Giorgos Lakkotrypis at the signing ceremony.

Production from Aphrodite is slated to begin in 2025.

But several steps will precede actual production. The first is drilling a second appraisal well at the gas reserve, followed by a Front–End Engineering Design and, lastly, a final investment decision by the concessionaires.

Lakkotypis said the companies intend to drill a second appraisal well over the next 18 months.

The estimated revenues are based on a revised production sharing agreement (PSA), also signed Thursday in tandem with the concession agreement.

The $9.3bn in revenues for the Republic are derived from a scenario forecasting an average of $70 per barrel of Brent oil in 2022.

The revised PSA is the outcome of year-long talks between the government and the companies.

Under it, the companies’ share of revenues rises when oil/gas prices are low; conversely, the share of the Cypriot state goes up when oil prices are high.

Lakkotrypis said the government agreed to this formula in exchange for iron-clad commitments from the concession holders.

The companies are contractually bound to adhere to strict development timetables, facing sanctions if they do not, including termination of the contract.

Overall, the companies will be spending approximately €7bn on well infrastructure, borehole drilling and maintenance and operation costs.

The signing ceremony at the ministry of energy was attended by the ambassadors of the United States, the United Kingdom and Israel.

“Cyprus is poised to become a natural gas producer and an alternative source of energy supply to the EU,” Lakkotrypis said later.

“At the same time, one more decisive step has been taken toward realizing the shared vision of countries in our region to create a Mediterranean natural gas corridor to Europe.”

The benefits to Cyprus would be manifold: gas sales revenues, job creation, the acquisition of technical know-how and, last but not least, strengthened relations with the countries involved in the project – Egypt, the United States, Britain and Israel.

Regarding Israeli claims to the Aphrodite prospect, Lakkotrypis said talks are ongoing with Tel Aviv, but that their outcome would not affect the reserve’s development.

A part of Aphrodite’s gas lies within Israel’s exclusive economic zone. Since the gas in the neighboring Yishai prospect, on the Israeli side, is part of a single geological reservoir, its production depends on agreements between the two countries.

Israel and Cyprus signed a delineation agreement in 2010 but haven’t agreed so far on how to develop gas reservoirs straddling both economic zones.