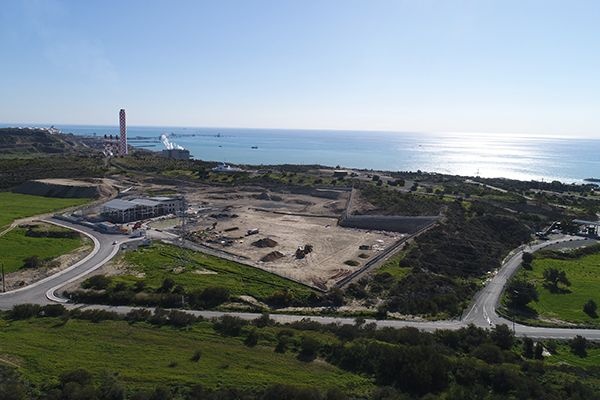 Construction on the main part of the first private power station in Cyprus will start soon, philenews reported.

The station will be located near the existing state-owned Vasilikos power plant in Mari, Limassol.

According to philenews, the earthworks, some basic infrastructure and the road network of the plant have already been completed and construction for the main infrastructure is expected to start soon.

The power station will have a capacity of 230 MW, generated through combined cycle technology.

It is expected to be able to produce electricity, equal to 17.5% of the country’s existing energy capabilities.

The station’s managing company, “Power Energy Cyprus” says that its construction will lead to a reduction in electricity prices.

According to philenews, the station is licensed to produce electricity until 2039.

Power Energy Cyprus (PEC) with consideration to the increasing energy consumption demand and to the planned electricity market liberalization, has acquired all the nescessary permits and begun construction of a state-of-the-art Combined Cycle Power Plant in Mari Area. The Power Station is anticipated to be in full operation by March 2021 and is projected to be in line with the arrival of LNG on the island. It is an estimated investment of 200 million euros.

Mari Power plant will use the latest technology in power generation. It will be a gas fired combined cycle power plant but will also be operated with diesel if necessary. The new turbines will produce electricity with less fuel therefore less cost. Furthermore, natural gas will be the primary fuel for the power plant which is much cheaper than Diesel and Heavy Fuel Oil.

The operation of the first power plant by a private initiative will mark the beginning of a new era in the energy sector and contribute to significantly lower electricity prices, President Nicos Anastasiades said on Friday after laying the foundation stone for the plant at Vassiliko.

Chairman of Cyfield group of companies which will construct the plant, Kyriacos Chrysochos, said it would have the capacity to produce 260 MW and would be able to serve up to a third of the current needs of the country.

Households, he said, would immediately notice the difference in their monthly expenditure and businesses’ cost would drop.

The station will operate with a new combined cycle technology, with two gas turbines, which will burn natural gas, and a turbine to convert emissions into steam and use it for extra electricity, he said.

The power generated from the new plant will be available through the electricity authority’s grid, while the network will be managed by an independent authority, the Cyprus Transmission System Operator.

“The electricity produced at the plant will be directly supplied to consumers, who will have the option of connecting and purchasing electricity from the supplier of their choice,” he said.

In his address, Anastasiades said that the project was of strategic value to Cyprus as it would contribute to changing the electricity supply map in the country.

“It is at the same time a project which will contribute to both the growth of the country’s economy and to significant reduction in the price of electricity throughout the economic spectrum,” he said.

The project, he said, was planned, funded and was being implemented solely on private initiative and funds. He said however that the reform of the regulatory framework was also necessary.

For this reason, he said, the government had modified the electricity market regulations, strengthened the Cyprus Transmission System Operator with additional personnel and amended the legal framework so that the Energy Regulatory Authority (Cera) could establish a transitional arrangement.

Furthermore, he said, the government made changes within the state-run electricity authority (EAC) “in order to enhance transparency and regulatory control… in order to be able to support the state’s objectives in terms of the management of renewable sources in the country’s energy blend.”

“Our actions to open the internal energy market are constantly expanding,” Anastasiades said.

Cera, he said, has already issued 10 new supply licences to independent suppliers, while two more applications for a supply licence are under consideration.

Energy costs and lack of environmentally friendly choices has been an obstacle to the growth potential of the country, he said.

The new energy landscape would create prospects for those growth initiatives that had been shelved while households would also benefit, he added.

But the reduction in the cost of electricity for businesses and households, he said, will come through the coordinated promotion of the four main pillars of energy policy; the operation of a robust competitive electricity market, the arrival of natural gas and its use in power generation, the promotion of renewable energy sources, along with the installation of intelligent electrical energy storage systems and systems and promoting measures to increase energy efficiency.

Anastasiades said that the government has also launched procedures to create the necessary infrastructure for importing natural gas for use in power generation.

“The cost of these investments is particularly high and that’s why I consider it a great success for our country that we have secured from the European Union funding to the tune of €101m for the creation of the necessary infrastructure,” he said.

The combined cycle gas turbine power station is being located on land leased from the Cyprus Ports Authority north of the Evangelos Florakis naval base.